Grady Ferguson was my BFF, business partner and co-founder of the Comstock Memorial Station, W7RN. He passed away in his sleep on July 14, 2020 at the age of 76 of COVID-19. This page will be updated with the history we shared over 50+ years. Here are just a few memories.

Grady at the Controls of his Hawker 800A Jet 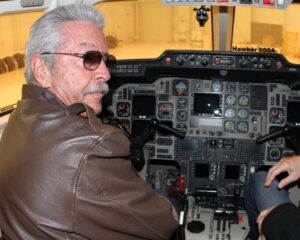 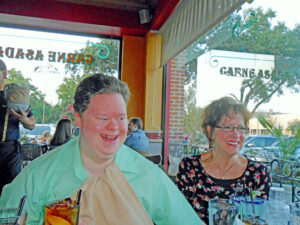 Grady, his sister Amy and Tom at a wine dinner in Houston. Amy is a world famous chef 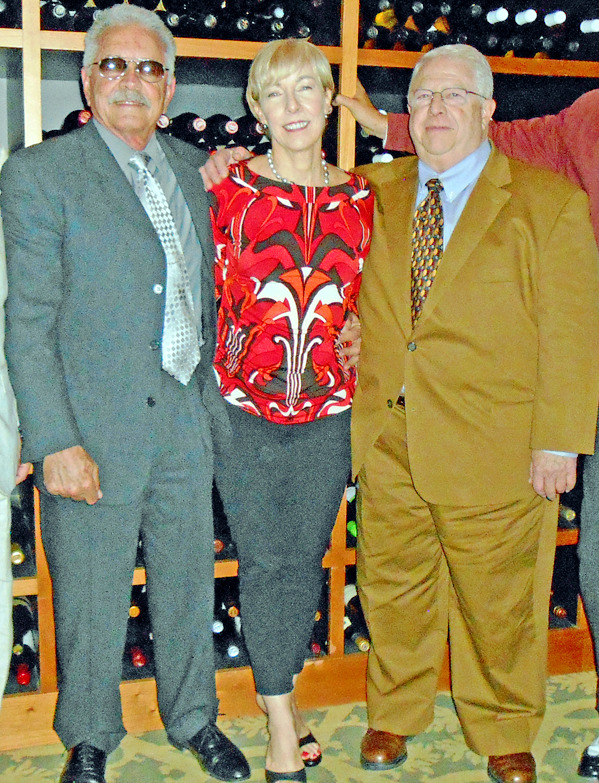 The Taormina Group at a defense attorney convention in New Orleans 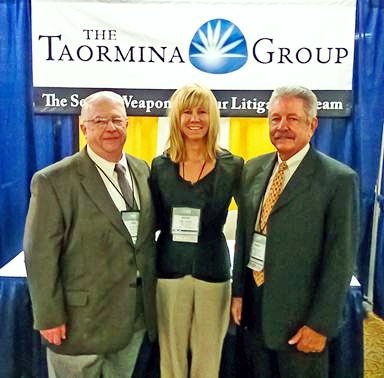 One of our operations at XE2FU in Nuevo Laredo Mexico 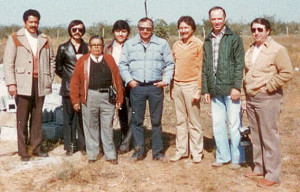 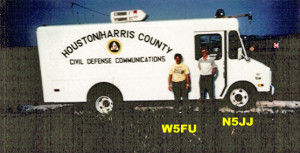 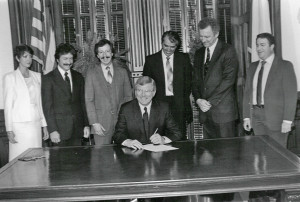 The devastation at Radio Manvel after Hurricane Alicia 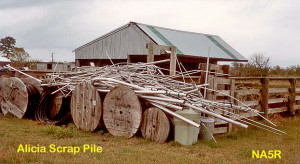 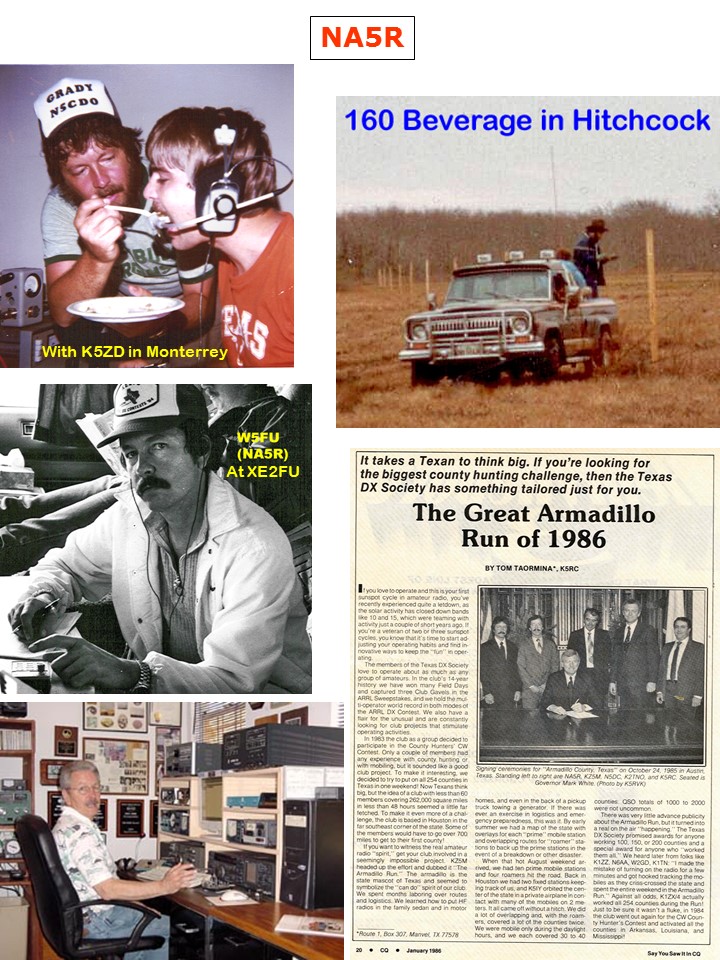 Grady and I met in 1966. We were both electronics technicians at Philco, the prime contractor for Mission Control, Houston. At the time, we were little more than co-workers building the green consoles for Mission Control. Grady left after a few years and I stayed on for 14.

Grady founded Ferguson Valve. He invented the first Teflon-lined ball valve for the oil industry. It grew to become a highly successful enterprise.

Grady was an avid CBer and frequented Madison Electronics in Houston where he met David Busick, N5JJ (SK). David convinced him to come over from the dark side to ham radio and he got licensed as N5CDO. David invited Grady to attend a Texas DX Society Field Day operation in the late 1970’s. That hooked Grady on contesting.

One fine Saturday, David brought Grady to my station, the K5RC/K5GA multiop that we had cobbled together in the southern part of Harris County. He quickly became one of the “regulars” that included N5JJ, K5ZD, K5GN, K5LZO, K5GA and other TDXS members. Grady joined TDXS as member #81 in 1980.

He soon became the leader of the TDXS “Rowdies”. We met at a bar we called Momma’s where we hatched legendary radio activities including competitive Field Days, The Armadillo Runs, the XE2FU contest operations and a passion for 160 Meters that led David and Grady to take over an abandoned transmitting site in Hitchcock.

The antics of the Rowdies became legendary in the Houston ham community and created a fellowship and passion for pushing the envelope that became the legacy of TDXS in the 1970’s and 80’s.

Grady and David hatched an idea to mobilize the TDXS and activate all 254 counties in Texas in one weekend.  We crisscrossed the state in cars and RV’s equipped with mobile ham stations. Over the next two years, we activated every county in Louisiana, Mississippi, Arkansas, Oklahoma, and New Mexico.

Perhaps our crowning achievement was convincing then Governor Mark White to proclaim Armadillo County for the Texas Sesquicentennial. We converted The Texas Independence Trail to a separate county for 1986. We have no idea how many hams drove Armadillo County during that time, but it is officially a deleted county. We also attempted to activate every county in the USA over two weekends. We fell short by several hundred, but it got us a cover of QST Magazine.

Grady grew weary of every weekend repair parties at the poorly constructed K5RC/K5GA station. He sold Ferguson Valve and bought 5 acres in Manvel. I was the design engineer and he would be the contractor. He moved a double-wide coach on to the property and Radio Manvel was born.

We discovered that W7KW was taking down his station in Arizona. We loaded the rowdies into W5BZN’s GMC Motor Home and headed West. In the scorching heat of August, we somehow survived taking down four AB-105 towers and loaded them into tractor trailers, along with thousands of feet of guy wire, insulators, and other goodies.

The plan was to transition from the K5RC/K5GA station to NA5R over the course of a year or two. Unfortunately, mother nature and fate had other ideas. Hurricane Alicia in 1983 leveled both stations.

Grady got divorced, I got divorced and I moved to Dallas for a year and we lost touch with each other.

Over those years, Grady and Geri married and had their wonderful son Andy. He is a Down Syndrome child and has been their joy for more than 30 years. Grady went back to school and learned pipeline and refinery inspection as his second career. He formed Impro Technologies and grew the company into one of the premier inspection services in the Country.

Having been an Airborne Ranger in Vietnam, Grady moved away from ham radio to his first passion of flying and sky diving. We moved to Nevada in 1997 and lost touch with him and most of the TDXS gang.

In 2005, I was pondering the wild days of the TDXS Rowdies and put out a call for a 20th Anniversary Armadillo Reunion in 2006 at our station. More than forty people came from across the Country. It was held over Field Day weekend, 2006. To keep in the tradition of TDXS pushing the envelope, we set up operating positions around the existing towers and powered the stations with a bio-diesel generator. We successfully entered the “natural power” category.

During a relaxing evening, over adult beverages, Grady suggested that we pick up where we left off in 1983 and build a world-class station at my place. He said he was selling ImproTech and I would be the chief engineer and he would provide the resources. Déjà vu all over again!

We started building the station at first with donated towers from N5JJ’s station, then, as plans came together, Grady’s mandate became stacked beams on every band from 80 meters to 10 meters. He wanted to build a 160 beam from an old construction crane, but I finally talked him out of a horizontal antenna for 160.

His role was to be the benefactor to give contesters a world class station to operate, continuing the tradition we started in Texas. As the station was progressing with local volunteer labor, Grady started Texas Aviation Sales. At one time he owned a Cessna Caravan single engine turboprop. It was mostly leased for hunters in South Texas, but he flew it here once. He also owned a Hawker 800A jet that would do Mach .87. He got rated to fly it and then sold it. During these years he was also doing competitive skydiving.

We had much of the station built when it came around to the dream of stacked 80M beams. I found two monopoles buried at W7UA’s station in Carson City. We had them refurbished, powder-coated and new bearings installed. Unfortunately, when they were delivered, they were offloaded at the bottom of my driveway for everyone to see. The neighbors and the new California interlopers who had moved into our rural area decided six towers was enough. They started a vigilante committee and talked a deputy DA into ordering the Building Department to issue a ten-year retroactive “stop work” order in July 2008.

Their intent was for us to dismantle the station and apply for permits for each tower that would go through the Planning Commission, public hearings, and a vote of the County Commissioners. Their complaint was that the towers lowered their property value and, ultimately, caused the real estate crash of 2008. That raised Grady’s ire to the boiling point and, as he so colorfully stated, by God that just ain’t right.

A four year-long battle ensued that led us to sue the County in Federal Court. It took its toll financially on Grady and emotionally on me and Midge. We finally prevailed and were granted a special use permit for 8 towers.

We had two monopoles professionally installed. 120’ that has a stack of four ten-meter beams and a 2 element 40. The 175’ monopole was home to four stacked 15-meter beams and two 3 element 80-meter beams.

Grady’s vision to have stacked beams on every band from 80 through 10 meters had finally been realized, at least for a few weeks. The Optibeam 80-meter Yagi’s self-destructed in the first windstorm. After several rebuilds, K7NV completely redesigned one of the beams and rebuilt it using American aluminum. It has survived several winters, and the project was deemed complete in 2015.

We formed the Comstock Memorial Station as a not for profit and Grady retired as its benefactor. The “memorial” theme was to honor other friends who had passed on, or became “silent keys (SK)” as hams call them. The operators are now responsible for maintenance and any station upgrades. He came out several times a year to keep his hands on the key, but basically was preoccupied with skydiving and other business ventures.

Bottom line is that his goal to provide a venue for hams without stations to have a first-class venue to operate and hone their skills was realized. It also continued the tradition of hosting multi-operator contests including being designated as the ARRL host station for Nevada during their Centennial year.

The other area of mutual pride was providing a home for WX5S and N6TV to line the wall with Sweepstakes plaques. N6TV has won SS CW twice from W7RN. WK6I has pioneered RTTY contesting using three radios and three computers. Another wall is lined with his plaques.

Over the last five years, we moved from multioperator contesting to installing remote hosts where contesters could use the station from home over the Internet. We now have a cadre of remote users from coast to coast who keep the two remotes regularly active. Of particular pride to both of us was providing a venue for the Grand Dame of ham radio, W1YL, to operate from her retirement home in Florida. She had logged 10,000 contacts in the first four years over the remote system.

Aside from ham radio, over the decades, Grady became involved in a least four business ventures surrounding my management consulting and expert witness practices. We valiantly attempted to raise the bar in business excellence but were less than successful in being the champions of quality and risk avoidance.

Those experiences transitioned me back into sole proprietorship and Grady into his last push to have a positive influence on the world. He was a principal in a gym in Houston, where he worked out five days a week. The gym has a large outdoor training venue that he remodeled into a youth sports center. Pro Fit Soccer provides indoor and outdoor sports fields for many youth activities.

Grady took title to the gym just before he contracted COVID-19 and was preparing for the grand opening of Pro Fit Soccer when he was hospitalized. It is now in operation, but he left a huge leadership and inspirational void. Midge and I are on the Board of Directors and will somehow ensure that his legacy and dreams are continued.

Rest in peace my brother from another mother, knowing the profound influence you have had on ham radio and now on youth sports.